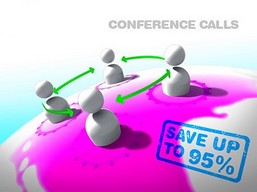 A conference is an arranged meeting, consultation or discussion. A conference call phone is a call wherein three or more parties interact simultaneously. Modes of communication not only include telephones, but also video and web communication. Conference calls are widely used by companies to facilitate meetings or to distribute information. It s a cost-effective way to reduce travel expenses and stay connected to one s counterparts all over the globe.

Conference calls connect people through a conference bridge, which is basically a server that acts like a telephone and can answer multiple calls at the same time. Companies using Voice over IP (VoIP) telephones can also host conference calls themselves if the VoIP software supports them.

Conference calls can also be used for entertainment or recreational purposes, such as the party line in which people can call in to a specified telephone number to talk to others and perhaps subsequently meet new people.

Thus, conference calls not only help businesses network without any constraints, but are also cost-effective. Conference calling is now utilized regularly by millions of businesses for a variety of reasons. It s made life easier by enabling meetings without the constraints of distance and tim